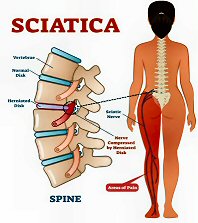 Last week I had to forgo my daily morning walks because my old nemesis decided to rear her ugly head. Yep, I’m talking about sciatica. It attempted to reclaim its old spot in my body. Wait a minute. Let me explain this properly.

Sciatica didn’t just up and attack me one day. I threw the first punch. Sciatica viewed the punch as an invitation and she obliged. In other words, she quickly RSVP’d. Fortunately, after a few days of shock and disbelief, I managed to come up with a protocol that escorted her to the door and tossed her out on her rump.

About a week ago I decided to restock the firewood pile. After all, it’s holiday time. Who doesn’t want a nice fire blazing in the background during the cool/cold holiday season? Okay, if you live somewhere warm, you wouldn’t want a fire, but I’m not one of the fortunate warm-weather folks so I like having a fire.

To load up the firewood, I grabbed the wheelbarrow, filled it to the top with wood and walked the wheelbarrow up the hill to the wood receptacle. To fill the receptacle, I had to make several trips of loading and unloading wood. I believe it took five or six trips.

I accomplished the task at hand but that task was just enough for me to poke the sleeping sciatica giant. Sciatica saw that activity as an invitation to come back and reclaim her old spot and cause misery in my life.

Her first few jabs stunned me, I didn’t know what to do. Part of me was in disbelief that after six or seven or even eight years of being sciatica free that I did something to cause myself such pain. Part of me didn’t want to believe it was sciatica. I kept telling myself it’s just a pulled muscle.

My daily walks were becoming more painful. Then I started feeling the tell-tale sciatica pain when transitioning from a standing to a seated position and visa versa.

By the end of the week, I knew it was time to bring in the big guns, my chiropractor. In essence, I tapped out. I called him on a Friday afternoon and left a message hoping he could see me the following week (Thanksgiving week). I wasn’t sure if he could fit me in.

While I was ruminating over whether or not he could see me I suddenly stopped and remembered who I was. I’m the gal that fights. Even if my chiropractor can’t see me, I can’t let sciatica get the best of me. It’s time for me to take her down! 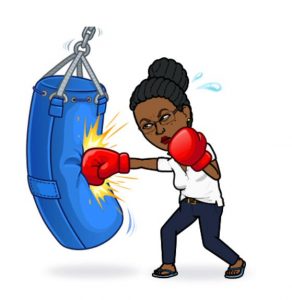 After making that “I surrender” phone call, I spent some time in meditation followed by research. I have too many tools at my disposal to help me take the girl down. So I invoked the essential oil plus magnesium plus electric stim protocol. Here’s what I did:

Friday evening I started massaging magnesium oil into the affected area. On top of the magnesium, I rolled on my essential oil mixture. I massaged them all into the muscle and then topped it off by placing the TENS pads over the area and running the stim for 30 minutes.

I repeated this procedure every 3 hours.

Because the pain was so severe, I started taking ibuprofen on Friday in accordance with the directions. The following morning, the pain wasn’t as bad, but I took one more dose of ibuprofen just in case. It was the last dose I had to take. However, I did continue with the magnesium, essential oils, and stim every three hours. By Saturday evening, I felt hints of my old self.

By Sunday things improved even more and by Monday, I felt like a whole new person. Early Monday morning I received a call from my chiropractor saying he could fit me in at 11 o’clock. I felt so good that I almost felt guilty at taking the appointment but I took it anyway.

He and I discussed my situation and he commiserated with me. Apparently, he had done the exact same thing but instead of firewood in his wheelbarrow, he had rocks and stones. He, too, took about five or six trips pushing a heavy wheelbarrow up the hill. When he was done he was in dire straits also.

I told him about my protocol and how much better I felt. I then hopped up onto the examination table. He was amazed and impressed at what he saw/felt. Actually what he didn’t see and feel. No muscle tightness, no knotted muscles, no muscle pain, and my hips were in proper alignment. I explained my protocol and he was impressed.

This is not the first time I’ve used essential oils to get myself out of a jam. But it is one of the first times that I’ve shared my protocol.

In the past, it took me several painful months to recover from sciatica pain. This time it took me 2 to 3 days.

I did not abruptly stop the protocol once I felt better. Instead, I lengthened the times between applications. Instead of every three hours, I went to every four hours, then three times a day until I weaned myself off.

The best part of it is, I’m, back to walking again (in my brand new Allbirds…but that’s the subject of another post).