If you have sensitive teeth, you know what ice cream, coffee or even a cold piece of fruit can do. Just the thought of extreme temperatures coming into contact with sensitive teeth is enough to send shivers down my spine.

Teeth and The Aging Process

I thought sensitive teeth just like reading glasses was a part of the aging process. I learned to work around extremely hot or cold food items. Or, if I did eat anything at extreme temperatures, I learned to move it around my mouth in such a fashion as to neutralize the temperature before it touched my teeth.

My teeth became so sensitive that I had to carefully monitor the water temperature when I brushed my teeth in the morning. Using mouthwash became a nightmare because it was always too cold. 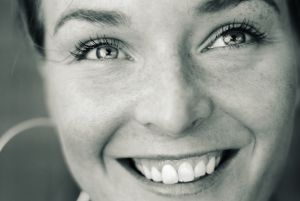 Just the other day as I was eating a banana (yes, the temperature of a cool banana used to bother my teeth), I realized I was able to chew it without playing the lets-warm-the-food-before-it-touches-my-teeth game. I was able to bite and chew like a normal person.

Wanting to test the waters a little more, I brushed my teeth using water that was much colder than I previously could stand. Hmmm, what’s going on? My teeth were no longer uber-sensitive to heat and cold.

Over the years, I made quite a few dietary changes. I dropped grains, wheat, processed foods and sugars (still use a teaspoon of raw sugar in my morning coffee). I increased my fat intake and started supplementing with vitamin D and magnesium. From what I’ve been reading, those types of changes contribute to improved oral health.

The one-two combination of dropping grains, etc and supplementing with vitamin D was just what my teeth needed to improve. Check out this post on Reversing Tooth Decay . If you read the entire post, you’ll see that the summary of dietary recommendations to cure cavities is the exact dietary plan I’ve been following.

For my especially sensitive molar, my dentist recommended a root canal. She made that recommendation in the summer of 2011. Having done research on root canals I opted not to do it. My husband thought I was crazy since he had just undergone a root canal and predicted what would happen to me if I didn’t have it done.

Here I am several years later and that particularly sensitive tooth is no longer sensitive. There was a point in time when I could not chew on that side of my mouth because of the extreme sensitivity. Guess whose chewing there now! I can even chew ice with no ill effects.

Think about it.  If broken bones can heal, why not teeth?

Note: I originally wrote this post in 2012.  For some reason, I didn’t publish it.  It took about 3 months of healthier eating for my tooth sensitivity to go away. Now, 8 years later, my teeth are pain-free. I never went back to eating processed foods as they do more harm than good.

Note 2:  I’m a big fan of high doses of vitamin C to handle acute situations.  When I say acute I mean things like colds, flu, viruses, infections and…sensitive teeth. I use it as a stop-gap until I can correct the cause of the problem.  Some people use over the counter cold medicines or antibiotics.  I use vitamin C.

In the case of sensitive teeth, I’d load up on vitamin C before going out to eat or social gatherings when I knew my sensitive tooth would be tested.  Vitamin C was my trump card until my dietary changes cured my sensitivity.

About the author: Felicia has learned the hard way that health, whether good or bad, is a result of daily choices and habits. On this blog Felicia shares what she’s learned and the healthier choices she now makes as a result of her new knowledge. She hopes to encourage others to experiment to find alternative solutions to nagging problems (she’s also is a bit of a tree hugger and likes to share ways to lighten the toxic burden on the environment).