I thought about it for a nanosecond and realized she was right. She then went on to talk about how the youngest victims are encouraged to become addicted to sugar. And, the sad thing about it is that good and nurturing mothers, thinking they’re doing the right thing, are unknowing participants of the insidious sugar addiction plan.

Sugar Consumption – Is it Really an Insidious Plan?

Questioning the “conspiracy theory” tone of the conversation, I had to ask…”Is it an insidious plan?” Of course, the answer is a resounding yes! Just stop to think about it for a minute. Who benefits from a sick society? Have you seen the plethora of pharmaceutical advertising lately?

I won’t go into the history on the vilification of fat, butter, bacon, lard and any of the other natural or animal-based fats. The rise of the low/no fat craze led to an increased production of no/low-fat foods that are high in salt and sugar. Let’s face it, if you remove the fat, you have to do something to make it taste good, so salt and sugar (aka high fructose corn syrup which has been renamed as “natural sweetener”) it was. I’m not telling you anything new here. You’ve read the headlines. You also know that there’s a growing movement to bring butter and natural fats back into our diet. “They’re” finding it to be healthy. The same “They” that said fat was bad are now realizing it’s not so bad.

Sugar and The Youngest Victims

With my heightened sensitivity of our sugar consumption, I took a look at an empty package of baby food my daughter-in-law fed to my granddaughter. Now let me preface this by saying that my daughter-in-law is a mama bear. She loves her children and will do anything to protect them. Her children were not bottle fed. She nursed the older one and is currently nursing the youngest.

She’s now introducing solid foods to my little granddaughter. Also as a working mom, she looks to some convenience foods to help her manage the household. As such, she purchased organic, non-GMO sweet potato/applesauce made by Earth’s Best Organic. I’m sure this package of food cost more than the non-organic baby food. After all, isn’t one of the complaints about organic food that it’s more expensive than “regular” food?

Anyway, as I was cleaning up, I made sure to save the package so I could give it the grandma eye later when everyone left. The following morning I took a look at the nutrition label and was taken aback. Before I state my case, here’s what I saw:

This little one serving package (stage 2) for babies six months and older contains 13 grams of sugar. Of the 13 grams, 2 grams were added sugars. So, the 11 grams of sugar wasn’t enough, they had to add 2 more grams just to increase the sweetness and increase the addiction factor.

How Much Sugar is Too Much?

I then did a quick internet search to find out the RDA (recommended daily allowance) for grams of sugar.

As you can see, according to the American Heart Association, preschoolers shouldn’t have more than 16 grams of sugar. They do not address how much sugar babies should have, but I’m guessing a one-serving package that contains 13 grams of sugar is a bit excessive.

I place the chart above in this post because society reveres the American Heart Association and their edicts are taken as the standard guideline. Following their guidelines have helped us to take our place on the list as being one of the most obese countries in the world. We may not be at the top of the list, but we’re doing our best to get there!

The Problem with Too Much Sugar

No matter which way you slice the pie, too much sugar is not our friend. According to an article on the Harvard Medical School blog, study participants who “took in 25% or more of their daily calories as sugar were more than twice as likely to die from heart disease as those whose diets included less than 10% added sugar.” It went on to say that, “Overall, the odds of dying from heart disease rose in tandem with the percentage of sugar in the diet—and that was true regardless of a person’s age, sex, physical activity level, and body-mass index (a measure of weight).”

Upon further research, I came across an article on the University of San Francisco ’s site discussing the link between sugar and diabetes. “For every additional 150 calories of sugar available per person per day, the prevalence of diabetes in the population rose 1 percent, even after controlling for obesity, physical activity, other types of calories and a number of economic and social variables.” It also stated that a 12-ounce can of soda contains about 150 calories of sugar.

Using a calorie/gram converter, I found that 150 calories of sugar are equal to 19.44 grams! Yikes!

Is it a conspiracy to get kids to have more sugar? Dunno, just look at these nutrition labels and take note of the “added sugars.”

I guess one gram of sugar wasn’t enough so Earth’s Best Organic decided to throw in an additional 9 grams for flavor. 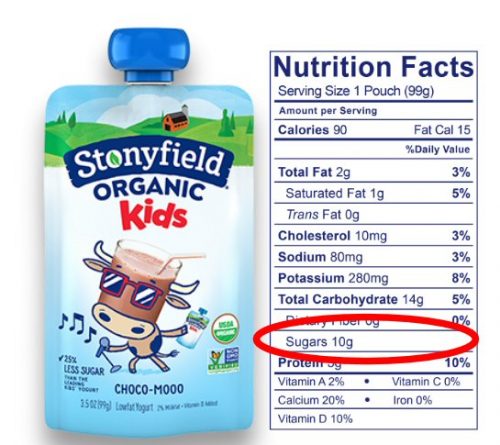 Keep in mind these little yogurts contain 3.5 ounces of yogurt. How many do kids have in a day?

They do contain 25% less sugar than the leading yogurt, but when you consider preschooler’s daily recommended sugar consumption is 16 grams, the child will need to eat non-starchy veggies and meat the rest of the day in order to stay within the daily recommended limit. 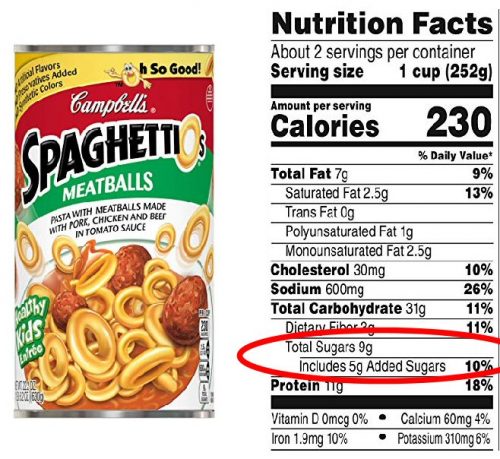 *This can provides 2 servings. Therefore, there’s 18 grams of sugar if a hungry child consumes the entire can.

How to Reduce Daily Sugar Consumption

Reducing daily sugar consumption is not easy. It’s even more difficult for those addicted to sweets. Having said that, there’s a direct relationship with the difficulty of reducing sugar and the reason for reducing sugar. If you have a big enough why, the how becomes easier.

Staying away from packaged foods or any foods with a nutrition label is a start.  Bringing out the crockpot and cooking your own meals is another way. Give your oven a workout. Try your hand at making casseroles and other oven-prepared dishes.  Cook in large batches and freeze some for a later day.

Gather your kids and try baking homemade sweets that are sweetened with natural sugars like apples, dates and berries. Although natural sugars found in dates, berries and the like are healthier than the nutritionally void sugars found in packaged foods, remember…sugar is sugar is sugar. Maybe it’s time to reintroduce savory foods and reduce the reliance on sweet snacks.

It sounds like a lot of work, but isn’t your health and the health of your children worth it? Once you get into the swing of setting the timer on the crockpot or prepping food that gets tossed into the oven, it won’t be so bad. Aside from eating better and more nutritionally dense foods, you’ll save money. You might even shed a pound or two. Not to mention nipping your child’s potential sugar addition in the bud.

Ketogenic Diet for Kids
The Dangers of Sugar