I’ve written more than once about the benefits of bone broth. Aside from being delicious, it’s healing. I’m writing about it again today to encourage you to keep the bone broth fat. Often times when meandering around the internet, I see great bone broth recipes. Unfortunately, some of the recipes advise readers to toss off the layer of fat once the broth cools. What?! Toss off the fat? Why would you want to do that? 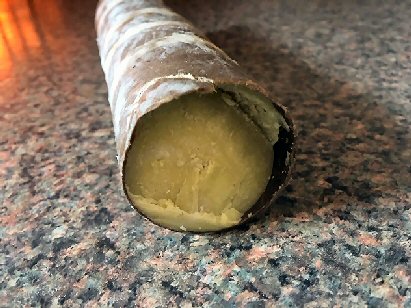 Even folks who do not follow a ketogenic way of eating should not toss of the layer of fat produced when making bone broth. If there’s more fat than you’re willing to consume (according to an article on Psychology Today, the brain is 60%  fat), save the fat for another day. When my broth makes more fat than I can consume, I separate some of the fat and put it in its own container. I later use that fat for cooking.

I’ve used the fat to cook chicken, fry eggs, lightly saute vegetables and a host of other cooking uses. I use it just like I use bacon fat, butter or coconut oil when cooking. I do, however, draw the line at using bone broth fat for things like almond butter pancakes or any other non-savory dish.

Non-Cooking Use for Bone Broth Fat

When the fat bounty is abundant, I take some of the extra and shove it into empty cardboard rolls.  You know the rolls that come from toilet paper or paper towels. I then stick the fat-filled cardboard rolls in the refrigerator. This allows the fat to solidify enough to make it easy to cut the cardboard into 1-inch slices. Once sliced, I toss the discs in a bag and stick the bag in the freezer.  Sometimes, when I’m lazy, I stick the un-cut roll into the freezer.  I cut it later on an as-needed basis.

These fat discs are great for starting fires. I’ve used them to start the charcoal grill. I’ve also used them to get the outdoor fire pit going. Wrapping the fat disc in brown paper from a paper bag or from environmentally friendly packaging works as a fire starter. Just light the paper and let the fat-filled disc do the rest. 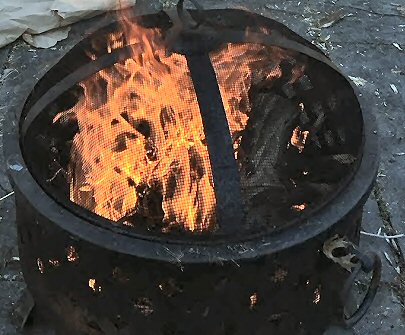 The beauty of using the fat discs is they don’t emit the toxic petroleum smell associated with commercial fire starters. It’s cheap, effective and nontoxic.  Actually, I should say less toxic, who knows what they use to create the cardboard cylinder.

My hubby gave me the side eye when he caught me filling the cardboard rolls with bone broth fat. He then shook his head and walked away. He’s learned that I dance to the beat of a different drummer. However, the first time I whipped out one of my discs to start the fire pit, he was amazed at how effective it was (score one for the oddball).

Another benefit: By including bone broth fat in my rotation of cooking oils, my jars of coconut oil and sticks of butter last longer. Additionally, the herbs and seasonings I used when I made the bone broth are infused into the fat so we not only get the health benefits the herbs offer, we get their flavors too.

The next time someone advises you to toss out the fat, ignore them.

Previous post: Understanding Keto – Out of the Mouths of Babes