≡ Top Menu ≡Categories Menu
You are here: Home » Understanding Keto – Out of the Mouths of Babes

A few days ago my daughter explained a very simple ketogenic lesson to me and it became my “Aha” moment. The explanation was so simple, yet poignant. She said, “If you want your body to become a fat burning machine, you have to feed it fat.” That was it. That statement caused lightbulbs to flash, birds to sing and created a keto level of understanding deeper than I ever had before.

That statement out of the mouth of the student taught her teacher a lesson. For a period of time, I thought I was “going keto” but I really wasn’t. What I was doing was eating low carb. There is a big difference between going low carb and going keto. That difference is what caused my weight loss to stall and my frustration to increase. As my daughter said, to create a fat burning machine, you’ve got to feed it the fuel you wish it to burn. 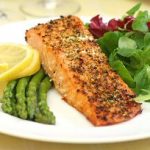 My meals of salads and chicken, or vegetables with fish or even steak and salad were great low carb meals. In preparing those meals, I did use butter or coconut oil when cooking the meats, but that wasn’t enough fat. No matter how progressive I thought I was, my mind was still affected by the years of low carb/ low-fat propaganda.

After our conversation, I went out and bought lots of avocados (in various stages of ripeness), sour cream, cream cheese, bacon, mayonnaise, mackerel and butter. In addition to the store-bought butter, I increased my production of homemade butter made with heavy cream from raw milk. My hubby stopped by the fish store and picked up wild caught salmon. When shopping at the local grocery store, I purchased nothing but the fattiest cuts of meat.

The same day of our conversation (which occurred on a Friday), I navigated over to Diet Doctor’s website and perused the recipes. I also read/watched several success stories to keep me motivated.

The first truly keto meal I prepared for that day was a salad with what I call keto potato salad. Instead of using potatoes in my potato salad, I used avocados. I cubed the avocados and proceeded to add all of my usual potato salad ingredients. Along with the “potato salad” we had a grass-fed bacon cheeseburger and kale/spinach/arugula salad.

With such a fatty meal, I wasn’t hungry for the rest of the day so I didn’t eat until the next day. The fake potato salad was such a hit, we had it again the next day along with flounder. Flounder isn’t such a fatty fish, so in addition to cooking it in coconut oil and butter, I created a sauce to put over it. The sauce was basically sour cream with pesto. Of course, a meal isn’t a meal without some fresh veggies, so we had another kale/spinach/arugula salad.

What I found was the meals were so satisfying and satiating, I only needed to eat one meal a day. In essence, I was practicing intermittent fasting. It wasn’t my intention, but I just wasn’t hungry, so why eat?

Eating one meal a day saves a lot of time. I only have to clean the dishes once a day. Not only that, I get time to truly plan a really nice meal. Eating once a day saves on groceries too. Heck, if I’m only eating once a day, I can afford to purchase grass-fed beef and wild caught salmon. Preparing 7 meals a week is much more economical than planning 21 (3 meals a day).

For those times when I can’t eat at home, I bake low carb/fatty breads and make sandwiches. Planning ahead makes ketogenic life easier.

Results of My Daughter’s Conversation

Three days after having our talk, I got on the scale. I only weigh myself on Sundays. I don’t weigh every Sunday, only on those Sundays when the scale doesn’t have the power to ruin my day. You know what I’m talking about. There are those days that if the the scale doesn’t say the right thing, it has the power to put a damper on the day. I don’t like those days. So, I only weigh myself when I have the mental fortitude to take whatever the scale dishes out.

This particular Sunday I was feeling good and knew the scale wouldn’t ruin my day so I got on. I was shocked and surprised to see that it went down by 4 pounds. Four pounds gone and it hadn’t been a full week of keto/intermittent fasting! I especially feel lighter around the waist. In addition to weight loss, there is an increase in energy.

Imagine, all this time I had been practicing low carb, but not really high fat. That’s a mistake I won’t make again. Bring on the healthy fats!

Previous post: Look at the Legs on Those Things (Leggy Seedlings)!