≡ Top Menu ≡Categories Menu
You are here: Home » Frankincense to the Rescue…Again

Frankincense, like so many of the other essential oils, is a wonder oil! I think I’ll have to share more of my essential oil success stories. This story, however, was quite by accident. I frequently use essential oils in my diffusers, in my beauty products and cleaning products. And, because I’ve been blessed with a long stint of good health, I forgot that I use them at times of illness.

I babysit my energetic grandson a couple of times a week. Anyone with a 2 ½-year-old in their vicinity, understands just how energetic they can be. When that bundle of energy slows down it’s either because he’s sleepy or not feeling well. Yesterday, he shows up at my doorstep with a lackluster whirlwind. Oh no. What’s up with my little guy?

His eyes looked drowsy, his nose red and runny and he lacked his usual perk. I picked him up, he rested his head on my shoulder and I knew he was coming down with something.

Oh my, how they can rub their noses to drag mucus everywhere! It reminded me just how gross toddlers could be. We were on opposite sides of the tissues vs. boogers war (me with the tissues, he with the boogers). Ugh, thick green stuff around the nose and at times rubbed into the eye. When we weren’t having the tissue vs. booger war, it was the “Come sweetie, let grandma apply this warm tissue over your eyes” in an attempt to remove the mucus from his impressively long eyelashes. The problem with long eyelashes is they can gather more crud than shorter eyelashes.

When I wasn’t wiping his nose, he was picking it. He would come up with a treasure and show it to me so I could grab a tissue to clean his finger and nose. This was a rather unattractive game, but I couldn’t get him to stop picking his nose.

With so much nose blowing, I didn’t want his little nose to get raw. To prevent the discomfort I poured avocado oil in a small 15 ml bottle and added 10 drops of frankincense oil. I put a drop or two of the mixture on my finger and rubbed it under his nose. The excess I rubbed around his face. I made sure to rub some around his eyes, but not in his eyes. Although when I had pink eye, I actually let it seep into my eyes.

Without exaggeration, within 20 minutes, the mucus stopped. At first, I didn’t realize it, but when we watched his favorite PJ Masks, we got through an episode without a little green treasure on the tip of his finger. Not only that, his nose stopped running. What!? So quickly? The young body is such a healing machine as long as we give it what it needs.

Well, if it worked so well and so quickly on the nose and mucus, I decided to put a few drops on my fingers and rub it on his chest. Of course, this idea invoked the you-can’t-catch-me-grandma, game. His energy seemed to have perked up too. I did manage to catch him and rub some on his chest. He thought that was hilarious. Well, I did manage to tickle him in the process. 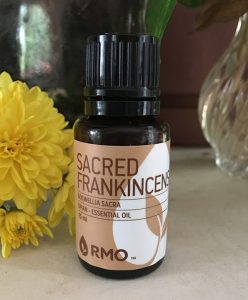 I sent the frankincense/avocado oil batch home with my daughter-in-law to use as needed. I instructed her to use as much as necessary because I can always make more.

After he left, I used my essential oil sprays to disinfect the house. Additionally, I added a few drops of frankincense and a drop or two of tea tree oil to my diffusers to really clean things up.

My daughter, who witnessed the entire transformation, couldn’t believe how quickly and painlessly the frankincense essential oil worked. She and her friends laughingly refer to me as the “Witch Doctor,” because I come up with oils and teas for just about every ailment.

Oh, and speaking of tea, I made a healing tea combo for my grandson. The tea contained rose hips, holy basil and rooibos. To that, I added apple cider vinegar and locally sourced organic honey. We sipped shots of tea while we watched PJ Masks.

My only regret is that I didn’t come into this knowledge sooner. I could have avoided the several doses of antibiotics I gave my kids when they were young. Oh well, as Maya Angelou says, “When you know better, you do better.”