What’s in Your Sour Cream? 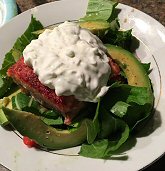 Never take a food nutrition or ingredient label for granted. I was shocked and surprised when a brand that I have trusted for years threw me a curveball. Actually, it was my own fault. I got complacent. It all started a few years ago, back in 2013 when I went to purchase heavy cream for my coffee. I wrote about it here.

Instead of my usual Hudson Valley Fresh brand of heavy cream, I bought Hannaford’s store brand heavy cream. I won’t re-write an earlier post here, but suffice it to say I was not happy with the ingredients in Hannaford’s heavy cream. There were unwanted and unnecessary ingredients. Not only that, the heavy cream didn’t taste good so I wound up tossing it out.

After that experience I became a loyal Hudson Valley Fresh customer. So much so that I stopped reading their ingredient label because I felt confident they were the best of the bunch when it came to such dairy products.

Several years later, still a loyal customer, I needed to purchase sour cream. Unfortunately, the store I was in didn’t have Hudson Valley Fresh sour cream so I bought the Breakstone brand. I read the ingredients and felt it was a good purchase. Although, one is never sure if Kraft is fully disclosing all of the ingredients that go into making their sour cream.

I’m always skeptical when I purchase a product made by the Kraft Foods Group. As a general rule I avoid Kraft, but I was in a bind.

Do both brands have the same ingredients and Hudson Valley Fresh is just being honest about disclosing it? I don’t know for sure and probably will never know, but my gut is telling me that one of the companies isn’t being so honest.

There is one surefire solution to my problem and that is to make my own sour cream. I found a super easy sour cream recipe over at the Whole Lifestyle Nutrition website. . I’m fortunate enough to be able to get my hands on as much raw milk and raw heavy cream as I need. I guess I’ll just have to prepare the sour cream in advance.

Now that we’ve adapted a lower carb and higher fat way of eating, we use more sour cream than we’ve ever used before. My long-term goal is to be as healthy as I can and eating ingredients like modified food starch, guar gum and “natural flavoring” does nothing but point me in the wrong direction. Making sour cream isn’t as convenient as picking up a pint at the local grocery store, but I’m willing to suffer the inconvenience in the name of being healthy.

Previous post: Tracking My Dietary Progress with My Fitness Pal