From my experience, I think adopting a ketogenic lifestyle will cause temporary blurred vision in some people. I noticed that after I went on an LCHF ketogenic way of eating my vision started to get blurry. I wear reading glasses and at times they didn’t seem strong enough. There were times I would put them on to read captions on the television. I had never done that before. 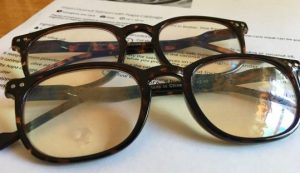 Since my glasses are only for reading, I never needed them to view numbers on digital clocks in the house. However, I noticed I was having difficulty reading numbers and had to put on my reading glasses to clear things up. That was a new and very unwelcome development. And my goodness, trying to read the small print on nutrition labels when food shopping was almost impossible. I started doubling up on my glasses for in order to read fine print. Yes, I looked dorky, but I had to put on 2 pairs of glasses to read such things (a woman had to do what a woman had to do).

As annoying as it was I didn’t panic. It made me think of the bouts of blurry vision I would have from time to time prior to keto eating. Some days my vision would be blurry and other days as clear as a bell. I couldn’t understand why the large fluctuations in vision, but being the analytical type I decided to track what I ate, where I went and whatever else might be influencing the changes in my vision.

What I had noticed was I would fluctuate from eating very low carb on some days and not so on other days. Some days I’d eat one meal a day that consisted of a huge salad and other days I ate more frequently with more traditional foods. My traditional foods were still low in carb, but I guess with the additional meals it added up to enough carbs that would modify my vision accordingly. I couldn’t figure out how or why the carbs were affecting my vision, but drastic reductions in carbs seemed to be the cause of blurriness. Before you ask, no I’m not diabetic.  BTW, being outdoors seems to be good for vision (at least in my case).

Enduring the Blurred Vision while LCHF

As I said earlier, I didn’t panic. Logically, I couldn’t see how cutting down on something that the body doesn’t really need much of could injure my body. It just made me realize that my body had become more addicted to carbs than I had originally thought. So, I continued eating LCHF and endured the blurry vision. Then, one day about a month into my ketogenic lifestyle, my vision seemed to clear up. It was like someone cleaned the computer screen and all the fuzzy edges were gone. I still need to use reading glasses, but now they seem to be the right strength. My vision has returned to what it was a little over a month ago before the month-long LCHF induced blurriness.

When my vision cleared I decided to test my urine ketones. I know it is not the most effective way of determining my state of ketosis, but it was all I had. When I first started my low-carb, high-fat way of eating, I tested my ketones using urine test strips and was alarmed at first. My ketone level was at the highest it could be. The test strip looked neon purple! I thought I was doing something to ruin my liver and kidneys. However, on further investigation, I realized my body was not fat adapted. 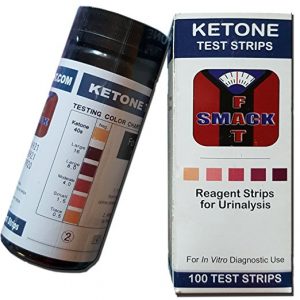 While I was eating low carb high fat, my body was doing its thing in learning how to use fat and ketones for fuel instead of glucose. Initially, the body hadn’t made the necessary modifications to properly utilize the ketones so many of them were being flushed out in my urine, hence the neon purple test strip. Now, several weeks later (about a month and a half), my body has begun to put the proper mechanisms in place to utilize the ketones. Thus, there are fewer ketones being released and flushed out in my urine. I know I’m still in ketosis because I’m careful of the foods that I eat, but as I’ve learned, the further along you go on the ketogenic journey, the less reliable the urine test strips become.

This go around my test strips told me my body wasn’t releasing as many ketones as it had in the beginning. In other words, I took it as my body being more fat adapted. The ketone test strip was in a more acceptable range. During that process, I believe my eyes had become fat-adapted too (if there is such a thing).

I don’t have this ketogenic thing down pat as yet. My hubby took a week and a half off from work and although we didn’t eat many carbs, we still ate too much food and yes, drank too much. Vodka may not have any carbs and neither does club soda, but the body will stop burning all other fuel sources until it burns the alcohol off first. Alcohol is a toxin and it wants to get rid of it. In the meanwhile, all other fuel consumed gets stored whether it’s fat or carbs. Hence, my stagnant weight loss. 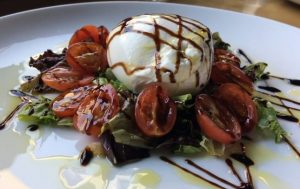 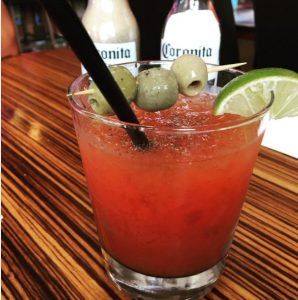 Ok, there was the occasional Bloody Mary 😉

From what I’ve learned, carb-less alcohols such as vodka and tequila do not take you out of ketosis, but they will stop weight loss. Added to that, we ate out at restaurants maybe twice a day. Even though we selected low carb, high-fat meals (well, actually, we had the chef modify the meals to ditch the carbs and double up on the veggies), I’m sure the sauces were not strictly ketogenic. So, weight loss for me has stalled.

Fortunately for me, he’s back to work and I’m back to preparing all our meals and ditching the vodka. I’m also back to my daily exercise routine which took a major hit while he was home from work. 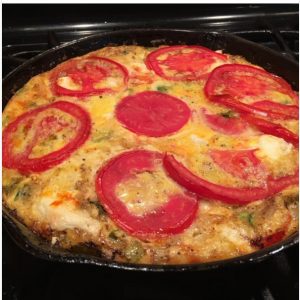 Hmm, just got me to thinking. Let’s see if my vision blurs again as I go back on my strict ketogenic way of eating. Only time will tell. If it does, I’ll make notes here. Honestly, I think I’m over the blurry vision hump, but I’ll check back in a couple of weeks to let you know if it returned.

It’s all about the journey!

9/6/17 Update:  No more blurry vision! It seems that my vision has returned to what it was prior to starting keto eating.  Hooray!

Next post: Tracking My Dietary Progress with My Fitness Pal