The Beauty of Activated Charcoal

Some time ago I bought a jar of activated charcoal. It wasn’t until my daughter came home for a visit that the jar got opened. She used it for a face mask. The mask consisted of combining activated charcoal with Elmer’s glue and slathering it all over her face until it dried. The not so fun part of the procedure was pulling the mask off. But afterward, she said, “My skin feels amazing!” 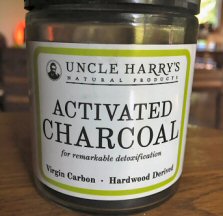 Because I like natural ingredients, the next time she decides to do the charcoal face mask, I’m going to make a batch of homemade glue. I found several recipes. One using flour and another using cornstarch, corn syrup and white vinegar (I’m partial to the cornstarch recipe). Elmer’s glue uses petrochemicals in its proprietary formula. Although, the glue is probably no more harmful than the chemicals my daughter already uses in her drugstore makeup. I’ve been trying to convert her over to chemical free makeup such as Blac Minerals but it’s an uphill battle.

On a positive note, a few weeks later she dropped the charcoal glue mask in favor of bentonite clay.  I consider that a small victory.

In addition to the loose activated charcoal, I purchased a bottle of the capsules. They’ve saved me many a time from digestive distress. The charcoal’s ability to bind with anything in its way makes it the perfect solution when going out to eat at a “questionable” restaurant. Just a few capsules and I’m able to eat like everyone else. Only I know that the meal will bind to the activated charcoal and eliminated from my body without wreaking havoc on my system.

Why do I go to such restaurants? Well, not everyone I know is willing to go to strictly organic, locally sourced restaurants. They tend to be more expensive and I haven’t been able to convert my crew as yet, so I take a few capsules and nobody’s the wiser.

A Little Info on Activated Charcoal

Activated charcoal has been used for centuries as a method for detoxing the body. It was also used in wound care to prevent infection. This is not a new protocol, Egyptians used charcoal as far back as 1500 BC. Closer to home, it’s been used for over 150 years to treat poisoned patients. It’s a common poison protocol used in emergency rooms.

According to an abstract listed in the US National Library of Medicine National Institute of Health,

“… recent studies that suggest that activated charcoal may be the single most effective treatment in many types of poisoning.”

This life-saving charcoal works by adhering to substances and binding them up which prevents them from being released to circulate throughout the body. The adhering process is called adsorption (not absorption). Activated charcoal is non discriminating. It will bind to both bad and good substances, therefore the rule of thumb recommendation is to take activated charcoal two hours away from ingesting medication or vitamins.

Activated charcoal can also be used for brushing and whitening teeth. I found this out while was listening to the Gut Summit on FMTV.

Side comment:  If you’re into health and haven’t heard of FMTV, I strongly suggest you visit their site and subscribe. It’s a membership site, but well worth the $8. It’s sort of like Netflix but healthier.

Anyway, in listening to the summit I learned that activated charcoal is known to bind with and remove stain-causing elements from teeth thus making teeth whiter.My daughter and I both decided to give it a try. What did we have to lose?  So we brushed our teeth every day for about a week with activated charcoal. After brushing we allowed the charcoal to sit in the mouth for about 5 minutes, sort of like oil pulling with charcoal,  then washed it out.

For me, the charcoal has been a lifesaver since I’ve been drinking several cups daily of tea whose herbal blend included turmeric. If you’ve ever had the pleasure of using turmeric, you’ve no doubt noticed its ability to stain things yellow. When I saw how the tea was staining the teapot, I knew it was slowly doing the same to my teeth. Fortunately, using activated charcoal has eliminated that problem. As a matter of fact, my teeth look a tad whiter than they did before. As long as I continue to drink the tea, I’ll continue to use activated charcoal on my teeth.