Who would have thunk it? Bone broth for hay fever relief. Imagine that!

The Gut is the Gateway to Health

One of the benefits of getting older is the ability to be patient enough to reflect. As I continue on my health journey I’ve been able to look back over my life and realize many of my ailments were related to an unhealthy gut, aka leaky gut. I had a plethora of allergies. Just walking into a room when someone was peeling a carrot or potato would initiate an asthma attack.

I’ve since learned that a leaky gut is the culprit. Here’s a brief (very brief) explanation of leaky gut:  During proper digestion, the body breaks down foods into small enough particles to allow the nutrients to be absorbed through the intestinal lining. With a leaky gut, the lining of the intestines have been compromised so instead of allowing small fully digested nutrients through the lining wall, the compromised lining allows large, not properly digested particles to penetrate through the wall. When this happens, the body sees the large pieces of food not as nutrients but as foreign harmful objects that must be eradicated. The body goes into fight mode to remove the large particles. The constant fight causes inflammation and sensitivity in the form of allergies. 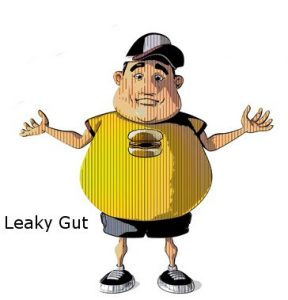 I’ve had allergies and other such autoimmune issues ever since I could remember. They began when I was around 6 or 7 years old. If I knew then (or my parents knew then) what I know now, I would have started drinking bone broth back then.

In the past, I’ve written about vitamin C for hay fever relief. It does work, but you have to take googobs of vitamin C. It’s not always fun reaching bowel tolerance (the level at which vitamin C saturates the system) to mitigate seasonal allergies. And, although the vitamin C helped, it did not totally get rid of the itchy eyes, sneezing and itchy/ runny nose. I still take vitamin C but much lower doses for general health, not hay fever relief.

This year, however, I noticed an absence of my usual seasonal discomforts. Although I’ve heard on TV and read in the news that this year’s hay fever season “is the worst hay fever season ever.” Don’t they say that every year? But, this year not even a random sneeze.

My husband is thrilled because he doesn’t have to hear the annoyingly squishy sound my eyes make when I maniacally rub them in my sleep. At this time of year, I usually look like I’ve been out drinking and partying all night. Fortunately, I don’t have that look this year.

I believe my daily habit of drinking a cup of bone broth prior to the beginning of hay fever season has much to do with my lack of symptoms. The bone broth helps to heal leaky gut which in turn stops my body from being so sensitive to things like dust and pollen.

Not wanting to take my theory as gospel truth, I went online to see if anyone else has had similar results and found the following:

Here’s my recommendation. If you’re suffering with hay fever (or any other allergy for that matter), go and get yourself some bones, preferably grass fed, organic bones. However, if you can’t find grass fed/finished bones, get what you can. Save the bones from your meals and start making bone broth. Drink a cup or two daily.

It takes a couple of weeks for the bone broth to kick in, but it’s worth it if you’re an allergy sufferer. You’ll also start to notice other benefits such as stronger nails, softer more radiant skin, reduction in joint aches and pains and an uptick in energy.

A few words of warning: When you first start drinking bone broth, drink your first few cups at night. You will get sleepy. The high mineral content in bone broth ( I believe it’s the magnesium that does it) brings on a bout of sleepiness. It’s great for babies who have difficulty sleeping. After my first cup of bone broth I slept for 10 hours straight. My 20-year-old daughter wanted to have a mug of bone broth because it smelled so good. She had a cup and later took a 9-hour nap. I had been drinking bone broth regularly for quite some time so I forgot about the first-time drinker’s nap until she went down like a sack of potatoes.

Nothing to Lose and Everything to Gain

Do your research. Don’t take my word for it. Once you’ve scoured the internet and learned all you can about bone broth, pick up some bones and start simmering.

I’ve written before about bone broth and how I make it, but here’s an update to my bone broth practices:

Depending on what’s in the pantry and/or refrigerator I’ve been known to add some or all of the following items:

In other words, flavor it however you want. Each herb, vegetable brings its own arsenal of health to the broth.