≡ Top Menu ≡Categories Menu
You are here: Home » For the Love of Healthy Hair

For the Love of Healthy Hair

Since this blog is all about health, I felt it necessary to begin with a few posts on hair health. Realize that since I’m a woman of color I’m going to address it from my perspective. Some things may apply to other races/nationalities and some might not. Just wanted to get that out of the way.

I’ve worn my hair extremely short for decades. I believe I first cut my hair off back in the 80’s. I’m talking 1980’s, not 1880’s. Yes, I’m a mature woman, but I’m not a relic. My shorn locks were not a popular or favorable hairstyle in my circles. When I grew up, black women did whatever they could to keep and grow their hair long. Long hair was/is a status symbol, not only in the black communities, but in other communities too. By cutting off my hair I was going rogue.

My grandmother was so upset that she threatened not to come to my wedding if I didn’t grow out my hair. I didn’t, but she came to the wedding anyway. I’ve never had the reverence for hair as many of my sisters do. I found it to be a royal pain in the rear end to care for my hair every time I swam, ran or biked. With my type of hair water and humidity would cause it to shrink and become difficult to manage.

In an attempt to tame my locks, I tried perming my hair but that didn’t go very well. I then tried the infamous Jheri curl. What a nightmare that was. It was a drippy, oily mess so that was also short-lived. Lastly, I relaxed my hair with S-Curl. S-Curls retained much of the natural characteristics of my kinky hair, but relaxed things just a bit.

S-Curls seemed to work for me, but since I kept my hair very short I would have to relax my hair every 2 or 3 weeks. Relaxing my hair so frequently became an issue with me when I became pregnant with my son. I didn’t want to continually put those chemicals in my hair/body so I went natural. On occasion, I would put in an S-Curl, but throughout the years I mostly went natural.

I enjoyed my shortly cropped ‘fro because it allowed me to be me. I didn’t care if it rained or snowed. I could run, swim, take spinning classes without worrying about my hair. Getting ready in the morning was a breeze. I could wash my hair daily if I wanted to because it was so closely cropped it dried in minutes.

All was going just fine until my second child, a daughter, got older.

Slight digression: My in-laws were very concerned when I had a daughter. They didn’t want me cutting her hair short like mine. They frequently would ask in a slightly judgmental way “Are you going to cut her hair too?” Being the rascal (for want of a better word 😉 ) I was, I’d always say, “Hmm, not sure yet.” 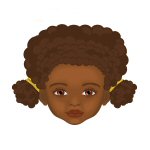 Bottom line, I never cut her hair like mine because she liked having hair. I let her decide whether or not she would cut her hair short, but that didn’t happen. As a matter of fact, quite the opposite. She is enamored with hair, the longer the better. So, as a dutiful mother of a black child, I did with her hair all the things my mother used to do with mine. Black hair care is time-consuming but it’s also female bonding time. Let me tell you, boy did we get a chance to bond.

Spending so much time on her hair reinforced my love for my closely cropped easy-to-care-for hair. Problems didn’t begin to arise until my daughter got older and started hounding me about letting my hair grow. Every time I’d start to let it grow, I’d get to a certain point (about an inch and a half) and then cut it. I just couldn’t stomach what it took to allow my hair to grow.

Learning about My Hair

Part of the reason I didn’t let it grow was because my hair is very kinky. I didn’t want to go through doing what it took to hide my kinks. That was something I grew up with; kinky hair was considered “bad” hair and non-kinky hair was “good” hair. Having this ingrained in my head from birth it was a way of life for me. As such, once I was old enough to make my own decisions, I cut my hair and kept it very close to my scalp.

Recently things have changed. I decided to stop cutting my hair. I’m allowing it to grow and I’m learning the real truth about my hair. First of all kinky hair isn’t bad hair, it’s just hair with it’s own personality. It’s unfortunate that we’re made to feel that anything that isn’t long, silky and flowing is damaged, bad or ugly hair. Difficult to manage? Yes. But, damaged, bad or ugly? No!

About 3 to 4 weeks after I decided to stop cutting my hair I realized I needed to do something. What did I do? I went to the internet to finally learn about my hair (Thank you NappyFu). Growing up my hair was straightened with a hot comb and kept in braids. When I got a little older it was temporarily straightened with a chemical relaxer (I told you that story already so I won’t rehash it here). Bottom line my hair wasn’t allowed to be itself. It was forced into unnatural styles in an attempt to mimic “acceptable” hair qualities.

Knowing that I wasn’t going to chemically relax or straighten my hair with a hot comb, it was time for me to really learn about my hair. That’s when I learned there was a hair rating system. This system was devised initially by Oprah’s hairdresser, Andre Walker. The system rated hair from straight (1) to kinky(4). Within the straight to kinky system were subcategories from A to C. For example straight hair is rated as 1 (there are no subcategories to straight hair. It’s either straight or it isn’t). Next is wavy hair, category 2, but under 2 there are subcategories A through C that define just how wavy the hair is.

Category 3 defines curly hair. Again from A to C the subcategories define just how tightly curled curly hair is and finally, there’s category 4 for kinky hair. Unfortunately, Andre Walker wasn’t familiar with my type of hair because he only defined kinky hair in two subcategories, A and B. Well, my hair is subcategory C which is the tightest of the kinky coils. Category C was added by sister 4Cs. I’m not sure who added it, but I’m glad she did. Bad enough I was told my hair was “bad” as I grew up. Worse than that would have been to be ignored from such a widely used hair rating system. It’s a good thing I’ve grown to accept myself as God made me or else it could cause a sista to get a real complex.

Identify and then Care

After identifying my hair type, I was better able to determine how to care for it. What I’ve found in my few weeks of allowing my hair to grow is most commercial products were not made with my hair type and subcategory in mind. My hair requires plenty of moisture and special care. Most of the products on the market are too harsh for my hair.

In addition to the harshness of the chemicals, I do not need to “shampoo” my hair as frequently as someone with straight oily hair needs to. When my hair was shaven I would wash my hair daily, moisturizing as I saw fit. But, as my hair grew, I realized that no longer worked. Washing my hair so frequently did nothing but dry it out and make it brittle. It was clean, but brittle hair breaks and that wasn’t my intention.

When you have 4C hair your mantra is moisture. Moisture comes in one form…liquid. My hair feels its best on humid days. It absorbs moisture like a sponge and becomes soft to the touch. On dry days my hair feels like straw. The trick is to get moisture into the hair and to seal it in. That’s when topical oils and creams come into play.

As a child, I was taught to avoid moisture like the plague and to use hair oils/creams to keep hair manageable. Applying oil to dry hair just makes the dry hair oily, it doesn’t give it the moisture it needs. So I’ve since learned that moisturizing is a two-step process. First, apply liquid in the form of water or mixture of water and natural healthy ingredients such as aloe and/or essential oils. The next step is to seal the moisture in the hair by applying an oil or cream. My hair requires this almost daily.

The second thing I learned about moisturizing my hair is it requires some sort of deep conditioning weekly. I’ve found that in the cold, dry winter weather I’ve got to apply a deep conditioner more frequently.

The third thing I learned about moisture is to retain it while I sleep. Laying my head on a cotton pillowcase encourages the moisture and oils to leave my hair and absorb into the dry pillowcase. As such I’ve taken to wearing a silk scarf before going to bed. UGH! This is a lot to go through for a gal who had a quarter of an inch of hair for the past 2 or 3 decades. 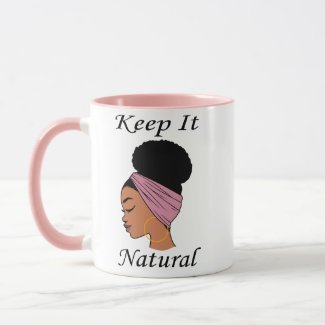 There are three motivating forces for my hair growth:

There you have it. This is a long post, but felt it necessary to define the beginning of my journey. From here on in I’ll share my successes and blunders in my 4C hair growing journey.

While watching Sesame Street with my grandson, we came across the following video. I thought it was cute and appropriate to place here:

in As We Age, Hair