Working with The Chapin Garden Sprayer

I think I’m learning more about my sprayer than I wanted to learn. The other day I decided to give my new Chapin sprayer a spin. I use it for foliar spraying my plants and vegetables with bokashi tea. Part of the tea preparation includes adding molasses which feeds bokashi’s beneficial bacteria.

I sometimes add water to an old molasses bottle to get the last remnants of the thick viscous substance. This time, however, I had allowed the watered down molasses to sit for too long (a couple of weeks or so) and it developed a film over the top. I didn’t realize a film had formed until after I poured it into the sprayer. 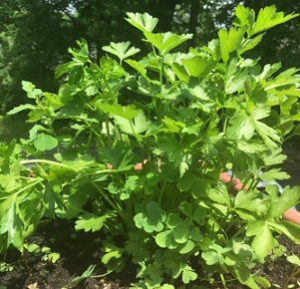 I made a mental note of the film, but continued accumulating the other ingredients that go into my foliar feed. I was so involved with making my concoction that I forgot all about the molasses film sitting in the sprayer. I was more concerned with adding the appropriate amount of water and not spilling the bokashi tea all over me.

Having my nutritious plant cocktail perfectly mixed, I inserted the lid into the sprayer, pumped the hand pump to build up the necessary pressure and began spraying my plants. I was extremely happy because the Chapin sprayer is sturdy and being 2-gallons in size, it was the right size and weight for me. I sprayed my collards, kale and cilantro on the back porch. I then decided to go to the front of the house to spray the blueberry bushes and strawberry plants.

I started spraying the blueberries when all of a sudden, it stopped spraying. Huh? How could that happen? It was spraying so nicely. I then had a quick flashback to the molasses film. Ugh! It must be stuck somewhere in there.

Thinking of my old plastic sprayers, the first thing I did was remove the sprayer arm from the gun-like mechanism. Nothing was there. I then realized I had to drain the sprayer to see where the clog was lodged. Since the Chapin sprayer doesn’t have a pressure release valve, I had to slowly and carefully loosen the top of the canister to allow it to slowly depressurize. 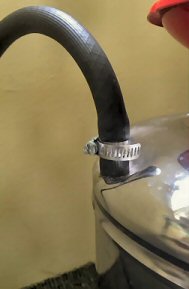 My first instinct was to remove the tubing from the outspout at the top of the canister. Unfortunately, I loosened the clamp, but the rubber tubing was stuck in place. I then tried blowing into the gun attachment in an attempt to loosen things, to no avail. I believe there’s a safety mechanism there to prevent liquids from going back into the canister.

Warm Water to the Rescue

As a last ditch effort I put warm water in the canister and placed the canister on its side in an attempt to soften/melt the clog. I was hoping it would dissolve enough to exit through the sprayer. No such thing happened.

The good thing, however, is that by placing the canister on its side, the warm water caused the rubber tubing on the outside of the canister to expand just enough for me to pull it off. That then allowed me to pull out the plastic tube and gain access to the clog. Once I cleared the clog I reassembled everything, strained and poured the bokashi tea mixture into the canister and finished foliar feeding my plants.

I thought all was well with my Chapin sprayer, but it wasn’t. Somehow air was getting into the sprayer and I couldn’t figure out how. I knew it wasn’t clogged since I now strain everything before pouring it into the canister. To find the source of the problem I dismantled the sprayer again.  What I found was there is a little black plastic mini-umbrella shaped thingy. The mini umbrella has a hole in the center that allows the contents of the canister to flow through.  If this little plastic piece is not firmly connected to the white plastic tube that resides inside the canister, air gets into the mix causing it to intermittently spray air.

I wish I had taken photos of the black plastic mini-umbrella shaped piece, but I was too intent on fixing the problem and didn’t think about grabbing my camera.  If it ever happens again (and I hope it does not), I’ll make sure to take photos for those of you with the same issue.

About the author: Felicia has learned the hard way that health, whether good or bad, is a result of daily choices and habits. On this blog Felicia shares what she’s learned and the healthier choices she now makes as a result of her new knowledge. She hopes to encourage others to experiment to find alternative solutions to nagging problems (she’s also is a bit of a tree hugger and likes to share ways to lighten the toxic burden on the environment).