Sciatica Update (and Hopefully My Last)

It’s been quite some time since I’ve had to deal with the excruciating pain of sciatica. Whenever I felt that all too familiar twinge, I’d massage the back of opposite hip and it would go away. I learned that trick from my acupuncturist. When I first went to my acupuncturist in obvious pain on my left side, she put me on the table, face down and starting pinning my right side.

Thinking that I hadn’t made myself clear, I reiterated that the pain was on the left side. She nodded her head in her Zen-like fashion and continued on. Imagine my surprise when after our session I got up from the table feeling quite a bit of relief from my sciatic pain.

Over time when I began to feel the telltale signs of sciatica, I would search for the energy blockage above my right hip. It’s easy to feel once you know what you’re looking for. It feels like a marble. The size of the marble varies depending on how long I’ve allowed the condition to exist. Once I find the marble, I take my thumb and massage it with enough pressure to break it up. Once the marble is gone, the sciatic pain goes too. I realized later that I was performing acupressure.

For folks not familiar with acupressure, here are a couple of links that explain it better than I can:

Lack of Movement Contributes to  Flare Up

Like I said earlier, things have been quiet on the sciatica front until a few weeks ago. I brought together all the necessary ingredients for a flare-up. I stopped taking magnesium, exercising 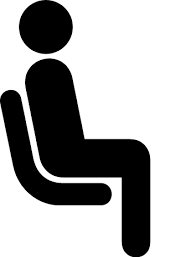 , stretching, bouncing on the rebounder and eating right. On top of that, I spent a marathon of 2 weeks sitting in front of the computer for about 10 to 12 hours a day (I switched hosting companies and had to transfer 20 sites over to the new host).

A day or two after my computer marathon I felt the beginnings of a sciatica episode. I tried massaging the lump, but I realized I had let things progress too far. I started a regimen of ibuprofen for a few days, but my stomach wasn’t too happy about that. Now, not only did I have an unhappy hip, but I also had an unhappy stomach.

I dropped the ibuprofen and decided to take proteolytic enzymes instead. I took massive quantities of bromelain and papain. To give you an idea of how much I consumed, a 100-capsule bottle lasted 4 or 5 days. The proteolytic enzymes not only helped to improve my digestion, but it significantly reduced my sciatic pain.

The icing on the cake with sciatica is to find a competent chiropractor. Lucky for me I have one. I made an appointment, got my adjustment along with ultrasound heat and went on my merry way. Since then I’ve made sure to get back to taking magnesium, go out for a daily walk and to be mindful of when I’m sitting for too long. Movement in addition to acupressure can keep a full-blown sciatic event at bay. However, if you allow things to get out of hand, find a chiropractor that specializes in sciatica pain. He/She will know the proper protocols to get you back up and running.

Sciatic trial and error got me to where I am today. In case you’re interested in reading about where I’ve been in order to arrive at where I am (sciatically speaking) here are a few posts documenting my journey: