This winter we seem to be pounded with snow; anywhere from the nuisance 3-inch snow up to a couple of feet of snow. Instead of sitting home grumbling about the annoyance, I decided to put the snow to work. Actually, the snow put me to work. Something as old-fashioned as shoveling has been a Godsend.

My driveway has a pretty steep hill. Everyone in my household has either all-wheel or four-wheel drive. I’m the only one stuck with a front wheel drive minivan. It does pretty well getting up the hill with a dusting of snow but with the amount of snow we’ve been getting it hasn’t been so easy. Therefore, I had to get out there to make sure the driveway is shoveled well enough so I can get out when I need to.

We have a guy that comes and plows the driveway, but when he gets done plowing there is about a half inch of snow left on the driveway that makes it just slick enough so that my car has a hard time getting up the hill. The only remedy is to shovel. 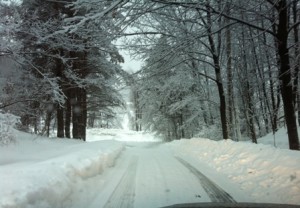 The first time I went out and shoveled I could only clear one half of the driveway. I’d have to go inside and rest before finishing the second half. The second time I was able to clear more of the driveway. By the third time not only did I shovel the driveway, I did the front walkway and the landing at the back of the house, which is a pretty sizable area. As a matter of fact, a couple of times I cleared the driveway before the plow guy came leaving him nothing to plow.

No Need for the Gym

My chiropractor had told me once that if I wanted to get a really good workout I should order a truck full of sand and dump it in the yard. Then using a shovel move the pile of sand from one spot to another. When I finish moving the pile from one spot to the other, wash, rinse and repeat. Shoveling piles of dirt or sand is vigorous exercise. I look at snow as if it were a pile of dirt. Fortunately, I don’t have to order a truck full of it. We’ve got plenty.

Now when it snows, I look forward to getting out there and getting a good workout. This workout is provided by nature and is free. Being outdoors in the cold crisp air makes the workout even more enjoyable.

Normally winter is the time of year when we hibernate and pack on a couple extra pounds. Not so this winter. I’m already beginning to see the difference in my body from shoveling several times a week. It’s at the point now that if it doesn’t snow, I start shoveling pathways in and around the yard. I’m probably the only nut that has the grass in her yard shoveled. A gal’s got a do what a gal’s got a do to get her workout on.

After seeing the difference shoveling is making in my body and in my energy level, I decided to go online to see what other people have said about shoveling snow. Aside from the usual warnings of being cognizant of your shoveling technique and not going out to shovel if you have a heart condition, or are in poor shape, here are a few positive benefits to shoveling:

TIP: When shoveling make sure to work both sides of your body evenly. Shovel as much using your right hand as the lead hand as you do with the left.

After getting my initial workout by shoveling snow I decided to reactivate my home gym. My home gym is not extensive. It consist of a bicycle which I turned into a stationary bike by propping it on the CycleOps  stand, a total fitness gym  that I purchased many years ago, various and assorted weights and an exercise mat. Oh, and I can’t forget music.

In the days when I run out of snow or the weather is too nasty to get outside, I use my home gym to hold me over until the next snowstorm. There are those who enjoy the cold weather for snowboarding, ice-skating or skiing. I don’t do any of those (except a little ice skating), but I do know how to get a great workout with a shovel.

Next post: How Far Away Have We Gotten from Our Food?