I don’t know if there is scientific proof that red meat contributes to menopausal hot flashes, but I do know that I gave up red meats a little over a month ago (June 18th) and within a couple of days the flashes began do diminish. After a couple of weeks they only occurred once or twice a night. Now, a month later…no more hot flashes. As a matter of fact, I’m back to the Felicia of old. I can tolerate the heat better than most.

Over a decade and a half ago I first started having hot flashes. Back then I started drinking Green Vibrance and that squashed the flashes. In addition to Green Vibrance I cleaned up my diet. All was going swimmingly for about 8 or 10 years.

The Body Continues to Change

Why they would return is beyond me. It appears the hormone levels in the body continue to change over the menopausal years and what works in the beginning may not work later on. All I know is there was an immediate and marked decrease in hot flashes once I gave up red meat. 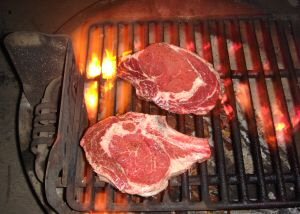 Will I Eat Red Meat Again?

On occasion. During my month of meatless eating I did have salmon, shrimp and a couple of pieces of chicken. I don’t eat fish/chicken daily, just once or twice a week. I’ve yet to have a hankering for red meat so I’ve left it alone. We still have frozen pieces of grass fed beef in the freezer so when I do have an urge I’ll satisfy it.

I do, however, continue to have bone broth. The broth is made from bones from grass fed beef. The mineral-rich broth doesn’t seem to cause hot flashes so I continue to drink it daily.

Is giving up meat the cure for hot flashes? I’m not sure, but I’m sure enjoying the reprieve. I’ll try to remember to report back 6 months from now to see if I’m still as cool as a cucumber.