A little over a month ago I made my first batch of bone broth. Since then I make sure to keep bones brewing daily. When I finish with one batch, I get rid of disintegrating bones and add one or two new bones in place of the old ones and start another batch.

Even if you don’t cook, you can make bone broth. I make mine in a crockpot. I fill the pot with bones, cover the bones with cold water and pour a splash of apple cider vinegar. The ACV helps to leach the minerals out of the bones. 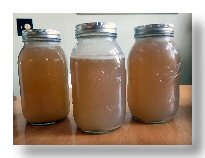 Afterwards, I cover the pot and allow it to cook on low for a minimum of 24 hours. If I forget to turn it off at night, it will cook an additional 8 to 10 hours overnight.

Next, I turn off the crockpot, allow it to cool just a bit to fish out the bones. I strain the liquid and pour the broth into containers. At first, I stored the broth in Rubbermaid containers, but one large container takes up too much space in my refrigerator. Instead, I now store the bone broth in mason jars.

One batch makes about 3 mason jars of broth. Several mason jars are easier to store than one huge container.

What Type of Bones?

I use all types of bones. I made beef ribs the other night, so I saved the bones for broth. Instead of tossing bones in the bokashi bin, I freeze them and save them for broth.

I also purchase grass-fed marrow bones from my local health store. I particularly look for joint bones because the joint bones carry more collagen  and there is a host of benefits associated with collagen.

I’ve yet to make bone broth from chicken, but that’s next on my to-do list. From what I understand, chicken bones don’t need to be cooked quite as long because they’re not as hardy as beef bones.

In general, I don’t season my bone broth when I make it. On occasion, I may throw in a pinch of salt, but that’s it. I leave it plain to give me more options when cooking with it.

I use bone broth instead of water or stock when cooking. I’ve added it when making spaghetti sauce, mashed potatoes, beans, rice, sauces and all of my savory dishes. I also drink a seasoned cup of broth once a day.

When I drink it as a broth, I add all of the “feel good” seasonings. You know those seasonings that have great health benefits and you’re not sure how to use. My cup of broth is a cacophony of flavor with sage, turmeric, curry, cayenne, sea salt, hint of garlic, and my new favorite, Tandori spice. To that, I add a pinch of coconut crystals and a teaspoon of coconut oil (I’m talking health in a cup).

I boil it up in a small pot (no microwave for me) and pour it into a large 12 oz coffee mug. I tried drinking it in the morning, but it made me sleepy. I think all the minerals (especially magnesium)  relaxed my body and made me want to go to sleep.

It took me a couple of days to realize it was the bone broth that was making me sleepy so now I only drink it at night. The first time I had a large bowl at night, I slept uninterrupted for 10 whole hours. I don’t think I’ve ever had such a deep restful sleep before. I woke up rested and ready for the day.

Bone broth comes with tons of health benefits. All you have to do is a quick search online to find out all it does. For me, I’ve found it’s great for cooking and sleeping. It’s also healthy, cheap and easy to make.

If you haven’t tried it yet, you should.