My first bucket of household scraps have fermented for two weeks and is now ready for planting. I didn’t want to take a picture of my trash, but I had to document the process, so here’s a picture of 4-week-old trash. 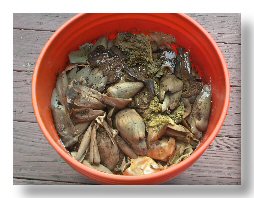 It took two weeks to gather the scraps and then they sat for two more weeks fermenting. All in all, the trash lost a little vibrancy, but everything was easily identifiable. It didn’t break down at all.

As expected, the trash smelled like a combination of pickles and apple cider vinegar. Not the most pleasant smell in the world, but definitely tolerable.

I got a real good whiff when I dumped the scraps into the soil.

I mentioned earlier that it is my intention to have a container garden on my deck. So in order to have the soil readily accessible, I bought a 36-gallon container and placed it on the deck.

After situating the bokashi soil container, I took a 5-gallon bucket and filled it with dirt from the yard. I dumped the dirt into the container and spread it evenly. To that I added the 5 gallons of bokashi scraps. 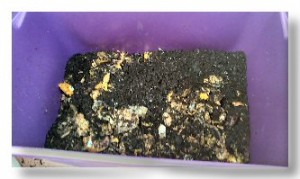 I used the previously purchased generic potting soil to cover my bokashi scraps. I first added a layer of dirt and mixed it a bit with the bokashi scraps. The food breaks down quicker if the scraps and dirt interact. On top of the mixture, I added about 5 to 6 inches of potting soil and then covered the container.

As you can see, it’s highly unlikely bugs or critters will get into my bokashi scraps. The container is sealed tight and the scraps are sufficiently buried.

And The Bokashi Cycle Continues

Now I wait 2 weeks while the buried mixture cooks. In the meanwhile, my second bucket of bokashi scraps is sitting aside fermenting. In two weeks I’ll be able to bury bucket #2 and bucket #1 should be ready.

Under my sink, I’ve got bucket #3 collecting scraps and I continue to drain the bokashi tea for my plants. I think the tea alone makes the bokashi process worthwhile. My plants are loving the tea and looking great!