For those of you new to rowing, especially sweep rowing and/or sculling, you’ll find that it takes a bit of coordination. This article will focus on one small part of a rower’s stroke; it’s called feathering.

As harmless as the term sounds, the technique takes a bit of skill. First of all, let’s explain what feathering is.

Feathering is especially helpful to newbie rowers or somewhat turbulent water conditions. A returning perpendicular blade on a boat with a bunch of new rowers or rough waters means that the back of the blade on occasion will make contact with the water on the return stroke. This not only hinders the smooth return of the blade, but it also slows the stroke and causes a rower to lose the rhythm and timing of the other rowers.

Hand and Arm Strength for Feathering

The feathering motion is controlled by the hand, wrist and forearm. New rowers may feel the effects of feathering all the way from the hand up to the shoulders, but over time with proper technique and as the muscles become accustomed to the new feathering motion, the muscle tenderness will go away. 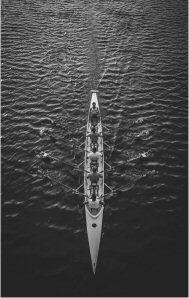 The rower’s hand located on the inside of the oar performs the task of feathering (note: the outside hand has the task of pulling and pushing the oar through the water, the inside hand only feathers). If one is rowing starboard, it’s the left hand that feathers and for port rowers, it’s the right hand.

During the stroke when the rower pulls the blade through the water, the feathering wrist should be flat and parallel to the water while holding oar handle. At the end of the stoke, during the return, the wrist should bend downward, causing the palm of the hand to turn perpendicular to the forearm. This motion will cause the blade to rotate into a position parallel to the water.

While the turning of the oar isn’t so difficult, finding the right timing may be more of a challenge to a new rower. Generally, the feathering begins as soon as the oar is lifted from the water and starts the return. The end of the feather, or the squaring up, should begin as the body hinges forward and the hands pass over the knees as the knees begin to compress.

By beginning the feather as the hand pass over the knees, the rower ensures that the blade is squared up prior to placing it in the water to begin the next stroke. If the rower allows the blade to enter the water before it’s perpendicular, the blade enters the water on a slant forcing it to dive too deep underwater which makes it difficult to pull the blade back out.

If 5 lbs are too heavy, start with 3, if that’s too heavy start with 1 lb weights. Sit in a chair and mimic the feathering motion. Make sure the form is correct. Be sure to sit straight, and extend the arm as if there were an oar in hand. Hold the weight and flex the wrist accordingly.

Hold the weight in the feathering hand ensuring the wrist, hand and forearm are straight and parallel to the floor. Do not allow the weight of the dumbbell to pull the hand down towards the floor. If the weight is too heavy, lighten the load.

After ensuring the hand wrist and forearm are straight, bend at the wrist pulling the palm up and the wrist down to imitate the feathering motion. You should feel the development of the muscles in your forearm. Repeat this motion for about 8 to 10 repetitions. Take a break and repeat for about 3 sets. Over time you will be able to increase the weights from 1 to 3 to 5 lbs or more.

Proof is in the Rowing

Depending on your physical condition and rowing frequency, there should be a noticeable difference in your ability to feather for extended periods of time. Your arms won’t feel as tired and you won’t need to use the excuse “my arm hurts” the next time the coxswain shouts “Power 30.”

Tagged as: how to feather when rowing, practicing the feathering technique