Making a bowl of raw oatmeal is easier than cooking it. It takes half the time and half the cleanup.

I’m not 100% raw by any means, but since I’ve decided to take a trip on the road to raw eating, I thought it important to figure out how to make a raw breakfast. I wanted something besides the obvious breakfast of a smoothie, shake or fruit.

To that end, I made a bowl of raw oatmeal. Here’s what I did.

Here’s what I did

Since I don’t have a Vita Mix high-powered blender (at least not yet), I had to rely on my good old Magic Bullet. In one of the small bullet containers, I placed the rolled oats. Since I already had almond pulp from making yesterday’s batch of almond milk, I didn’t’ have to grind the almonds. However, if I were to grind the almonds, I would place them in the container with the rolled oats.

I ground the oatmeal until it was powdery fine and then dumped it into a cereal bowl. To that, I added my almond pulp. 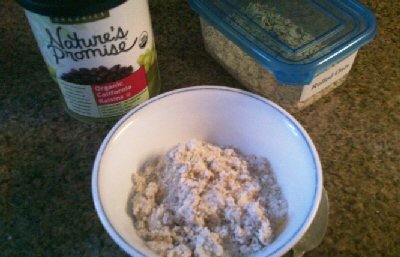 I then took a few raisins and one date (pit removed) and placed it in the Magic Bullet container. I added milk and gave it a spin on the Bullet. I wanted to grind the raisins and dates to release some of the sweetness into the milk so that it would distribute the sweetness evenly throughout the cereal.

I poured the almond milk onto my powdery fine oatmeal/almond mixture and stirred. That’s it. The oatmeal was so tasty that my hubby (Mr. Anti Raw) wanted a bowl of his own. 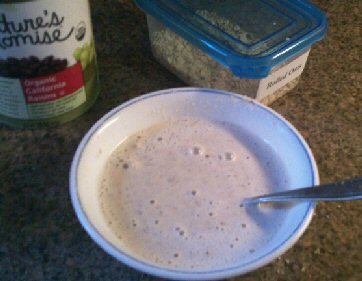 BTW, you may notice that my cereal mixture is a little loose. If allowed to sit for a minute or two, the oatmeal thickens. I have learned from experience to make the cereal a little loose to avoid having a block of thick oatmeal by the time I get to the bottom of the bowl.