≡ Top Menu ≡Categories Menu
You are here: Home » We Are What We Eat

We Are What We Eat 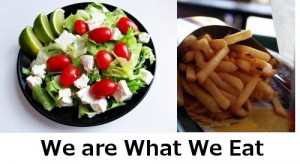 This is not a profound statement, and I’m sure we all know this by now.

Just yesterday while I was at the mall, I met a man that personified the statement. He was in front of me at the check out line. He purchased several hundred dollars worth of workout clothes.

He was a personable fellow so he and I got to talking (our talking diverted my attention from the cash register and I almost forgot to claim my 20% discount). Anyway, this gentleman was purchasing workout gear because he had to lose 60 pounds or so.

His doctor explained that his surgery had to be put off until he lost 60 pounds. Of course, I inquired as to what type of surgery. This chatty fellow gave me a brief rundown of his history. He had a prior surgery in which the doctors attached a colostomy bag as a result of 3 flare-ups of diverticulitis.

He later underwent another surgery to remove the colostomy bag. Apparently the latter surgery caused a rather large hernia, which bulged about the size of a grapefruit from the right side of his navel (I could see it poking out through his T-shirt). He had to lose 60 pounds before the doctor could repair the hernia.

His strategy for losing 60 pounds was to modify his diet and exercise. Initially his plan sounded reasonable. Because he had gained so much weight, he didn’t have workout gear that fit, hence the purchase of shorts/T-shirts/gym bag, etc.

We both strolled outside of the store and continued chatting. We discussed his workout schedule and his eating habits. He wisely decided to go to the gym after work instead of first thing in the morning. Once his body got over the shock of working out, he would move his gym time to the morning.

As we were strolling and talking, we walked through the food court and I could tell he was having a hard time. The food court at the mall is the short cut to the restrooms and that is the only reason I ever wander through it. He, on the other hand, was being enticed by the various fast food chains. There was McDonalds, Nathan’s, Chinese take-out, pizza and a host of other choices. 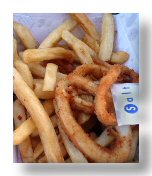 He explained that his normal diet consisted of fast food (I got the distinct impression that this gentleman was not married). He was preparing for his “last meal” before going on his diet. His last meal was to consist of Nathan’s, McDonalds or one of the other fast food joints in the mall (I cringed).

He then explained that his new eating habits would consist of salads and maybe a slice of cold cuts here or there (more evidence that this man isn’t married).

Not having the time to sit and plan a healthy menu for this guy I met at the mall, I suggested that he add lean meats to his diet (instead of the salt laden cold cuts) and plenty of fruits and vegetables. He did know enough to drink plenty of water.

I had other errands to run so I wished him the best and went about finishing my errands. When I looked back, he was there pondering which fast food joint would get his money for his last meal.

When I got home, I told my husband, “You’re a lucky man,” and then went about preparing dinner. As we ate our chicken fajitas made from free-range chicken and wrapped with organic whole-wheat wraps, re-fried beans (made from dried beans, not canned beans), homemade salsa and tossed salad, I couldn’t help but think of the gentleman I met at the mall.

We are what we eat. If we put garbage in, we’ll definitely suffer some pretty nasty consequences.

Tagged as: eat better to live better, fast food vs healthy food, featured, we are what we eat