≡ Top Menu ≡Categories Menu
You are here: Home » What is a Baker’s Cyst?

What is a Baker’s Cyst?

Imagine my surprise when the lump on the back of my leg behind the knee was diagnosed as a baker’s cyst. What the heck is that? 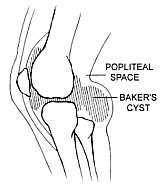 Symptoms of a Baker’s Cyst

I had worked particularly hard in my last spinning class. The tension was turned full tilt as I did a seated climb up an imaginary hill. It took a lot of pulling and pushing to make it to the end of the song.

Somewhere along the way I must have pushed or pulled too hard on a nearly fully extended leg. Or, maybe it was at the end of the class during the calf stretch. Somehow I created the perfect situation for a baker’s cyst.

The defining moment didn’t occur in the spinning class, it occurred later on when I went to sit cross-legged on my daughter’s bed to help her with a problem. As I sat I felt a sharp pain in the knee area. I immediately uncrossed my legs only to feel as if my knee joint was giving way. I fully expected the bottom portion of my leg to flop uncontrollably in its own direction.

The bottom portion of my leg managed to remain intact but it felt very unstable. There was intermittent pain for a few hours. When the pain stopped I was left with an unstable knee that didn’t like performing routine tasks like going up and down the stairs

What is a Baker’s Cyst

In layman’s terms, a baker’s cyst (technically called a popliteal cyst) is the swelling on the backside of the leg behind the knee caused by misplaced fluid (synovial fluid) emanating from the knee joint. Somehow the fluid that’s supposed to remain around the knee joint either leaks or gets trapped and ends up at the back of the leg. For a better and more technical explanation of a baker’s cyst, read what the Mayo Clinic has to say.

What to do with a Baker’s Cyst

Fortunately, my bout with the baker’s cyst occurred right before my next chiropractic appointment. I explained the symptoms to my chiropractor and he said, “This is what you do. Go home, look at it, play with and touch it as much as you want for a couple of hours and then leave it alone for a week or so. You’ll be fine.” He also recommended that I lower my bike seat during spinning class for about a week.

Since it’s my routine to spin one day and run the next, I opted to slow things down for 2 or 3 days. Instead of running I walked several miles and instead of spinning I opted for strength training paying particular attention to my core (speaking of core, I found a great 5-minute ab workout, but that’s the subject of another post).

Everything is Back to Normal

It’s been one week and everything is back to normal. I took the best spinning class of my life yesterday and I’m back to running (well, I call it running, but true runners would call it something else). The bottom line is, my baker’s cyst caused temporary discomfort but healed quickly.

I am cognizant of the amount and type of pressure I put on my knees. While a baker’s cyst may not be a serious condition, I’d rather not go another round with it.

in As We Age, Fitness, Injuries, Knees