I hate to interrupt my series on knees and chondromalacia but I have to write this post about Zumba while the memory is fresh in my mind (you know, that aging thing).

The other day my gym sponsored a Zumba party. For grins, I decided to go. I coerced my teenaged kids to come along with dear old mom. My son brought his girlfriend and my daughter brought one of her school friends. All 5 of us showed up ready to Zumba.

Four out of the five of us had never taken a Zumba class before. My daughter hadn’t even heard of it so I went to the Zumba site to show her what it was all about (she thought it was another old fart dance that her mother did around the house and wasn’t too excited about going). It wasn’t until her friend told her that Zumba classes were fun that she decided to give it a try.

If you’re not familiar with Zumba, check out their website to see what you’re in for. No matter what you see on the internet, it pales in comparison to taking an actual Zumba class. I must warn you, however. If you do not like loud music, stay away from Zumba. Half of the fun of Zumba is allowing your body to move to the loud, melodic, pulsating music.

Having grown up listening and dancing to both Latin and Caribbean music (among other genres), I felt very much at home winding up my waist, moving my hips and becoming one with the music. If you’ve never listened to Latin music before, don’t worry. From looking around the room, I could tell several of my Zumba classmates had never danced to Latin music before, but they were having a grand time.

Because the class I attended was a promotional Zumba party hosted by my health club, the Zumba class lasted for one and a half hours. No, that’s not a typo, we danced for 90 minutes. There were four instructors and each instructor brought a different dance flavor. We went from more traditional Salsa to Meringue to Calypso to Hip Hop to a mixture of all of the above.

Before engaging in a full-fledged routine, each instructor slowly performed the dance step which was simple enough for the class to follow. After performing the dance slowly, they quickly performed the step on tempo. By using hand signals, the instructor informed the class how many times to perform the move and which direction (left, right, front or back) to move when doing the step.

Zumba isn’t for everyone. Like I mentioned earlier, if you don’t like dancing and loud music, then Zumba isn’t for you. Personally, I got lost in the 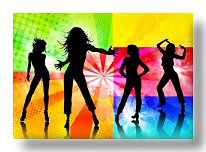 rhythms and had a ball. It had been quite some time since I was able to “get my groove on” with a Latin flair (my family just doesn’t have the same appreciation I do for Latin and Caribbean music).

Dancing is a good workout. Taking Zumba is an ever better workout. The instructors not only use traditional dance moves, but they throw in moves to target certain areas of the body. I couldn’t believe how they were able to discover hidden muscles that I haven’t used in quite some time.

Don’t listen to me. Try Zumba for yourself. Let me end this with a few words of caution: If you take a Zumba class, make sure to bring ample water.

Previous post: Is it Sand in the Knees or Chondromalacia?