The other night I was up late and was flipping through cable channels when I happened upon a Spinning infomercial.  Of course, since I just got back into spinning, I decided to watch the infomercial. 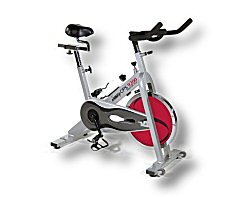 The program advertised the virtues of spinning. As part of their sales pitch, they showed several before and after pictures of individuals who lost weight and improved their health through spinning.  According to the infomercial, you can burn 1,000 calories per hour spinning.

For just $49.95 you can try the spinning program in your own home for 30 days (satisfaction guaranteed).

The Lure of Spinning

The infomercial does a good job in getting the viewer excited by showing the various DVDs that come along with their program.  It’s supposed to simulate the excitement of a spinning class, but there’s something very different between joining a virtual spinning class and one with real live people.

The infomercial claims you can burn up to 1,000 calories spinning.  I’m not saying that it’s not possible.  Keep in mind; however, to burn 1,000 calories, you’ve got to go full tilt for about 90 minutes. Most people who are looking to shed weight and improve their appearance don’t have the physical endurance to go full tilt for 90 minutes straight.

If you decide to order the Spinning program, it will cost you $599.95 (or $649.99 if you pay in installments).  For that you get the Patented Spinner FIT Bike and 3 spinning DVDs.  Depending on which ‘special’ you’re entitled to, you can get a bonus of a free water bottle, Guide to Ride Handbook and an 8-week weight loss program.

Not having the ability to test out the bike, I strongly recommend that you go to your local sporting goods store and try a few exercise bikes.  Heck, go to Amazon and look at a few of their exercise bikes.  Their bikes range in price from $130 to $500 and more.  There is a pretty wide selection of bikes within that price range (like buying a car, you should always test drive a bike before purchase…even a stationary bike).  If you’re willing to spend $600 on a Spinning Fit program, you could probably spend half as much, purchase a bike and then purchase exercise DVDs separately.

Better yet, if you already have a non-stationary bike, all you need is a bike stand and you can use your bike both indoors and outdoors.  I’ve found the CycleOps bike stand to do the job just fine (they’re very sturdy).  Once you’ve set your bike on the stand the only thing you’re missing is a few Spinning DVDs to get you going.

Spinning Classes at the Gym

My preference is to go to the gym and take spinning classes with other sweating spinners.  However, having a setup at home doesn’t hurt either.  Who knows, if you set things up just right at home, your spouse or significant other may want to join you.  It could be the beginnings of your own home-grown spinning class.

The important thing is that you get the exercise and take steps (or pedals) towards fitness.

Next post: Spinning Classes: Nothing to Fear but a Sore Rear