As recently as three days ago I didn’t know what a cuboid was. After all, it’s a funny sounding name and when folks complain of aches and pains, you never hear about the cuboid.

Well, after my hubby’s recent experience with a wandering cuboid, I hope and pray my cuboid remains in place forever.  Here’s the scoop:

One day my hubby woke up with foot pain.  He got up and almost fell to the floor.  Being the person he is, he hobbled around and dealt with the pain.  He had a bit of swelling on the side of his foot that only hurt when he applied weight.

Not being the athletic type of late (meaning in the past 10 or so years), it wasn’t a sports injury.  He hadn’t twisted, banged or otherwise injured his foot. We were perplexed as to how could this happen all of a sudden.

After spending time on the internet, we figured it was gout. Although the flare-up occurred in an odd spot (the side of the foot), after visiting the Foot Pain Explained, we stood by our diagnosis.

Because we thought it was gout, immediately we analyzed his dietary habits. After reviewing the dietary habits that can lead to gout, we felt my hubby was the ideal candidate for the condition, so we immediately worked on changing his eating habits.

By day two, as the foot pain worsened, but it only hurt when he put weight on it and not at any other time. That didn’t seem to follow the classic gout symptoms.  It wasn’t warm or sensitive to the touch. It didn’t throb.  It only hurt when he applied weight.

A kickboxing instructor friend told him to look up cuboid on the internet.  What?  What the heck is a cuboid?  Once we looked it up and found out what it was, yep, that’s exactly what the problem was.  His cuboid bone had somehow subluxated. That’s chiropractic speak for the bone wasn’t in its proper place. 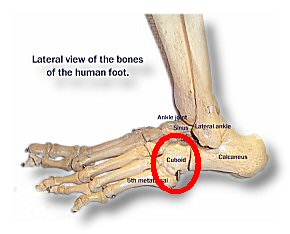 Now the truth comes out.  About a week ago, at his normal chiropractic appointment, he complained about his ankle.  His chiropractor adjusted his ankle and my hubby went on his merry way.  Three days later, his cuboid fell out (well, not really fall out, but it didn’t stay where it was supposed to stay).  We’re not so sure if the adjustment lead to the condition or not, but here we were.

Solution to for a  Subluxated Cuboid

The solution is to go to the chiropractor and have him put it back in place. Unfortunately, on Saturday when he went to his chiropractor, his chiropractor was out on a camping trip with his son.  The chiropractor suggested that I massage and adjust his foot.  What??!!! Are you crazy?  I saw the pain this man was in (and he never complains about pain, even after knee surgery). I couldn’t do it.  Plus, I wasn’t sure whether to push up or down.  I didn’t want to make it worse.

So, instead, we had to keep him off his feet for the weekend until Monday morning when Paul Bunyan got back to civilization and was able to adjust his foot.

Oh, and just as an aside, the gout diagnosis made my hubby truly analyze his dietary and exercise habits.  He was ready to lose weight and get in shape…then he found out it wasn’t gout…

Moral of the Story

Tagged as: how to fix cuboid problems, painful cuboid bone, subluxated cuboid, what is a cuboid, where is the cuboid

in Alternative Care, As We Age, Chiropractor, Foot

Previous post: The Ankle Bone is Connect to the Hand Bone?