≡ Top Menu ≡Categories Menu
You are here: Home » What is a Tensor Fasciae Latae and Why does Mine Hurt?

What is a Tensor Fasciae Latae and Why does Mine Hurt? 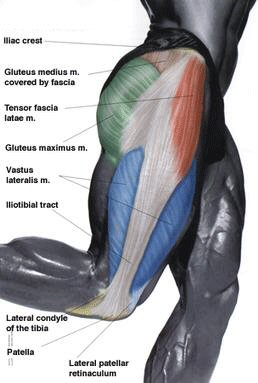 I recently had the dubious pleasure of discovering a new muscle in my body. The muscle is called the Tensor Fasciae Latae. This lovely little muscle is located in the hip area. If you haven’t discovered yours, count yourself lucky.

How I discovered My Tensor Fasciae Latae

As the day wore on I noticed some pain around the hip area. It hurt when I walked, moved in certain ways and it also hurt to the touch. For a quick moment, I wondered if this was the beginning signs of osteoporosis and the need for hip replacement surgery (I’m not really a hypochondriac, but my brother just had his hip replaced so the thought was on my mind). Then I thought about it for a moment, since it was painful to the touch; that meant muscle pain…whew!

Because of my advancing years, I decided to rest a day before the next run. I ran the same distance and later in the day the pain was even worse. Not being one to give in, I rested another day and ran a third time. This time the pain was so bad, there was no way that one day of rest would be enough for me to run again.

I decided to call it quits until I got in chiropractic adjustment. I assumed that I was out of alignment thus causing my lopsided hip pain. I explained the problem to my chiropractor and he basically gave me a stretching exercise, told me to stop being a wuss and get out there and run. So after he adjusted me, I went running the next day.

That running advice was bad advice. The pain was so bad that I had to pull out the ibuprofen (I don’t like taking medicine). I assumed the muscle was inflamed so along with the ibuprofen I ate anti-inflammatory foods and walked around with ice in my hip pocket, 20 minutes on, and 20 minutes off. I did that for the remainder of the day.

Time to Find the Root of the Problem

I decided to find out what was causing the problem and address it head-on. That’s when I discovered that the offending muscle is called the Tensor Fasciae Latae (TFL). It’s a neat little muscle located just on the outside of the hip. The muscle engages when you put one foot in front of the other. Here’s a better explanation of what the Tensor Fasciae Late muscle does and how it works.

After finding out what the TFL does and how it works, I found this article that explained why mine hurt so bad and how I caused it to hurt.  One of the causes is an increase in mileage or physical activity. So I guess when you go from sitting on your rear end to running a mile that’s a marked increase in physical activity. Other contributing factors can include (but are not limited to) a leg imbalance, sedentary lifestyle, being out of shape, uneven muscle development or just plain old getting older. Whatever the reason, my TFL is a little pissed off.

From what I’ve read, the first thing to do is to stop the acute pain (that’s a no-brainer). No one likes to be in pain.

Once the pain has subsided, stretching the muscle is a good idea. There are a few stretching exercises that I came across that seem to target the Tensor Fasciae Latae muscle. It involves standing straight and crossing the leg of the non-affected hip over the leg of the affected hip (balance yourself first), then lean to the side of the non-affected hip. This helps to stretch the FTL. I’ve been doing this several times a day (even though I’m still in the pain stage).

It appears that the next step is to condition and strengthen the appropriate muscles. I’m still a little fuzzy on how to do this. I’m looking at a few sites that have interesting exercises to help rectify my FTL problem.

In the meanwhile, I’ve taken to biking instead. I’m still working on reducing the inflammation and pain (pedaling doesn’t seem to bother the TFL) in preparation for the next step.

If anyone has sound advice on how to recover from an angry TFL, I’d love to hear it.

Next post: Tensor Fasciae Latae Pain – Was it the Sneakers?